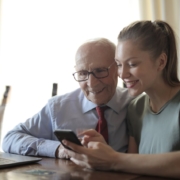 The stereotypical image of an older adult struggling with the most basic functions of a computer interface is pretty much ingrained in our subconscious through countless movies and anecdotes. Apart from the obvious ageism of such a depiction of older adults is it even close to the truth, especially now that computers and similar devices have become so widespread? It might seem as a detour but in order to answer this question we should embark on a brief journey through the development of computing and digital consumer products.

When they first entered the market, personal computers and other devices such as digital cameras were the domain of tech-savvy people and early adopters who could put up with complex interfaces in order to enjoy those technological marvels previously reserved for scientists and industry people. Many of us may remember, with some amusement, the “arms race” between various manufacturers aiming to make faster processors and more detailed digital camera sensors. It was a battle fought with gigahertz and megapixels and at that point it seemed logical enough since existing hardware could not cater to the ever-increasing needs of the users of such devices. Predictably when too much emphasis is placed on performance, ease of use tends to be overlooked. With the amount of money being invested in computing however it was only natural that at some point this arms race would end simply because the hardware did in fact improve dramatically.

Essentially this was the impetus for a dramatic shift. The focus shifted from raw power to user experience and usability. Multimedia became the new buzzword and as more people started using computers, companies strived to make their interface more user friendly. One could say that we entered the present age of ubiquitous and easy to use technology as the first smartphones and tablets appeared. And the driving force behind that forward leap? Well it is of course the touch screen! Many dismissed it as a flashy gimmick when it first appeared but it fundamentally changed the way we interact with a computer interface. It was the first time we could physically interact with digital objects. We didn’t have to move the mouse and click on an icon, we just touched that icon. In essence we could operate digital items much like we would operate mechanical buttons. This is particularly important for older adults who may be more accustomed to mechanical systems where one has to physically interact with switches, buttons and other aspects of the interface. It is not surprising that tablets and smartphones are becoming increasingly popular among older adults who now represent an ever-increasing segment among users of these devices.

It may seem ironic but computing became more user friendly and accessible to older adults when devices deviated from the paradigm of a classic personal computer. What tablets have taught us though is that older adults are interested in new technologies as long as they are accessible to them and also that all user groups appreciate more intuitive interfaces. Computers and the internet are intertwined with our daily lives and we should do anything in our power to make sure that older adults are not excluded from today’s digital society. Luckily the tech industry’s focus on usability remains strong with software applications becoming increasingly user friendly and being offered in various platforms (PC, tablet, mobile). This approach not only allows older adults to choose the platform that is easier for them to operate but also makes using the same application across platforms easier as they retain their core design and operating principles. Furthermore tech companies have begun to design software and hardware specifically for older adults as they begin to understand their importance as a distinct user group. Even when it comes to products aimed at diverse age groups, efforts are often made to ensure that they can be operated by older adults. This is done both to expand the range of users but also because it is a good indicator of effective design and intuitive operation.

After an admittedly long detour I believe we can finally answer the question presented at the beginning of this article. Nowadays technology is far less intimidating to older adults offering better interfaces and a variety of hardware allowing users to select what better suits their needs. One can expect computing to become even more accessible but that should not keep older adults from engaging with presently available technology. Indeed the increasing percentage of older adults that are using digital devices and surfing the internet indicates that they are not willing to wait anymore! We are at a unique point in time where everyone can reap the benefits of new technologies with little effort, safe in the knowledge that they are not left out of societal interaction which has now moved to the digital domain. At the same time the future looks even brighter or at least more accessible and user-friendly.

What can I do?